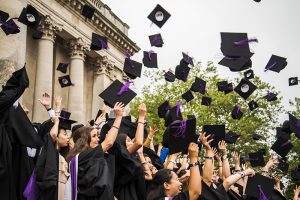 When you were 25, we asked you about your university education, your employment and income. We also asked for your agreement to link your school exam results to your survey responses, so that researchers could analyse this additional information alongside the Next Steps survey data.

The research team from UCL looked at what difference having a degree made to your generation’s earnings at age 25, taking into account a range of factors including family background and how well you did at school. They found that first generation female graduates (those who were the first in their family to go to university) tended to earn 8% less than female graduates whose parents were also graduates. This was largely due to taking jobs which did not require a degree, not doing as well in school, and attending less prestigious universities.

The researchers found that first generation male graduates, on the other hand, tended to earn more than male graduates with graduate parents. They noted that this might be due to social pressure on men from less well-off backgrounds to succeed financially and help support their families, while men from richer backgrounds might not face the same expectations. Similarly, first generation female graduates might not experience this social pressure from their families due to their gender.

However, the study did show that attending university had a positive effect on first generation female graduates’ income. Women who were the first in their family to go to university earned more than women who didn’t go to university but could have, based on previous exam results, and whose parents also didn’t attend university.

This study shows that first generation female graduates may be discriminated against by employers, or that they select jobs that have lower salaries. Universities can use this information to provide enhanced career services to women who are the first in their family to attend, to help them fulfil their potential in the job market.

Dr Morag Henderson, one of the researchers on this paper said: “The findings of this study highlight some differences between women based on their parents’ education and the importance of better understanding why men who are first generation graduates do not face the same pay penalty. More research is needed to better understand the drivers of these differences.”

The Labor Market Returns to ‘First in Family’ University Graduates by Anna Adamecz-Völgyi, Morag Henderson and Nikki Shure was published in the IZA Discussion Paper Series.