Many people take risks for the first time as teenagers, such as drinking alcohol or smoking. Researchers have used Next Steps to understand more about which young people engage in risky behaviours.

Findings have shown that young people who take part in one risky behaviour are more likely to take part in others as well – for example, those who play truant are also more likely to shoplift, go to pubs, loiter, smoke, drink, smoke cannabis and engage in risky sexual behaviour. Many of you who engaged in these kind of activities were very influenced by your friends and peers at school. 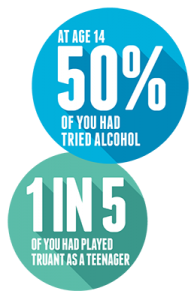