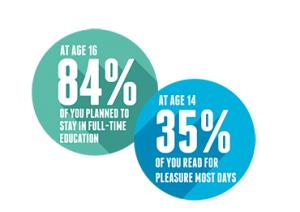 Next Steps has helped shed light on the factors that influence young people’s performance at school.

More than half of you who stayed on in education past the age of 16 were still in education when you were 19 years old. However, a quarter of you were not in education, employment or training (NEET) at least once during this period, and 3 per cent of you had been NEET three or more times.

Findings have shown that poverty and disadvantage can affect educational achievement. Pupils from disadvantaged backgrounds did less well in school than their more advantaged peers, and were also more likely not to be in education, employment or training by age 17.

However, Next Steps has also shown that this is partly due to the fact that disadvantaged young people are less likely to believe in their own ability and have lower aspirations for their futures.

Findings from Next Steps were used in setting up the Educational Maintenance Allowance, a scheme to help young people from low-income families with the costs of travel, books and equipment for school or college.

After finishing school, some people choose to continue their education or training. Findings from Next Steps have helped show the government that they needed to improve the quality of the practical qualifications or apprenticeships available to young people. Find out more about how you’ve influenced the government’s thinking on vocational education.