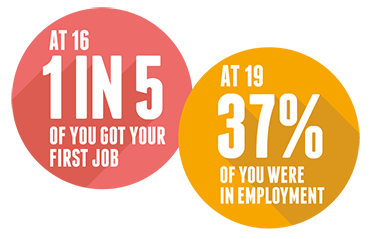 Youth employment is a major concern facing UK society today. Next Steps has contributed significantly to our understanding of young people’s experiences of the labour market.

A major focus of Next Steps has been to help researchers and policymakers understand the factors that affect young people’s entry into the labour market after they leave compulsory education, and why young people from disadvantaged backgrounds are most likely to become NEET.

Next Steps has shown that young people’s educational attainment at age 16 is the most important factor affecting whether they are in education, employment or training at age 18. In 2011, the government used these findings in their policy on tackling the root causes of youth unemployment. Find out more about how you’ve helped shape government policy.

Check out our FAQs for more info about the study, taking part and what we do with your information.