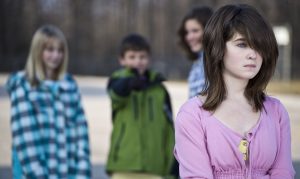 Ten thousand fewer pupils are being bullied every day than 10 years ago, a major new study of secondary school pupils has revealed.

The Department of Education report compares the experiences of Next Steps study members to members of Our Future, a new study which started following Year 9 pupils in 2013. This landmark research, which involved tens of thousands of young people from 2004 and 2013, is one of the largest of its kind ever undertaken.

It shows bullying among Year 9 pupils has fallen dramatically since you were in school. The findings show that:

Speaking before the start of Anti-Bullying Week 2014, Education Secretary Nicky Morgan praised teachers, charities and parents for their efforts. She also urged them to continue their “moral mission” to further reduce bullying, recognising that many parents consider it their number one concern about what happens at school.

“No child should have to suffer the fear and victimisation of bullying,” the Minister said. “Today’s figures show that our teachers, parents and charities have made great strides in reducing bullying, which I know is the number one concern of many parents.

“But even one child bullied is one too many, so I am calling on all teachers, charities and parents to continue this moral mission and reduce bullying further.”