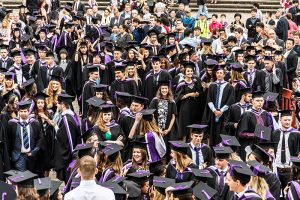 Research using Next Steps has found that young people who are the first in their family to go to university are less likely to attend an elite institution and are more likely to drop out than those with graduate parents.

When you were 25, we asked you about university education, including where you had studied and which courses you had taken. The researchers also took into account a range of other factors, including family background, income, ethnicity, as well as prior academic achievement.

By age 25, 27% of you had gained a degree, two thirds of which were the first member of their family to go to university. Among children of non-graduates, those of you who had gone on to higher education tended to have already done better academically compared to those who had not gone to university.

Probing deeper into young people’s university and subject choices, the researchers found some clear differences between those who had been the first in their family to get a degree compared to those whose parents were graduates. Compared to children of graduate parents, first generation graduates were less likely to have attended one of the prestigious Russell Group universities, and were more likely to have opted for subjects that led to higher earnings and had a clear path from university to the job market, including degrees in law, economics and management.

The study authors also found that first in the family students were at greater risk of dropping out of university compared to those who had a parent who had been through the system. Overall, while more than two out of three of all university students completed their degrees, this share was four percentage points lower among those without graduate parents.

The findings underline the importance of equipping first generation students with more information and support that enables them to navigate the university system and make the best choices.

Moving on up: ‘first in family’ university graduates in England by Morag Henderson, Nikki Shure and Anna Adamecz-Völgyi was published in the Oxford Review of Education in August 2020.

This research was covered in The Telegraph, the i, and Times Higher Education.