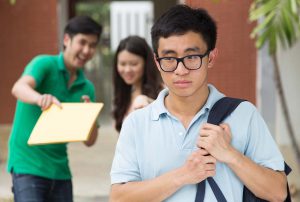 Primary and secondary school pupils with special educational needs up to twice as likely as other children to suffer from persistent bullying.

The study, the largest of its kind to be carried out in England, analysed information on more than 19,000 children and young people from two important studies: the Millennium Cohort Study, following children born in 2000-01, and Next Steps.

Researchers from the IOE’s Centre for Longitudinal Studies and the London School of Economics examined the prevalence of bullying at ages 7 and 15 among children with different types of cognitive and physical impairments.

Seventeen per cent of children and teenagers had special educational needs, of whom 4 to 5 per cent had a ‘statement’ outlining what additional support they should receive at school. Children with statements of need are generally those with the most severe learning difficulties.

At age 7, 12 per cent of children with special needs and 11 per cent of those with a statement said they were bullied ‘all of the time’ by other pupils, compared to just 6 per cent of their non-disabled peers.

As disabled children are also more likely to come from disadvantaged backgrounds, it has previously been difficult to determine whether it was their disability, their family’s disadvantaged socio-economic position, or some other factor, that led to the bullying. However, the authors of this sophisticated new statistical analysis were able to single out the effects of disability alone from other bullying risk factors.

Although there was a clear link between special educational needs and bullying at age 7, the picture became more complex in the teenage years.

Fifteen-year-olds with statements of special educational needs were significantly more likely to be frequent victims of threats or acts of physical violence and theft, even when other factors that increase the risk of bullying were taken into account. They were also more likely to be excluded by a group of schoolmates or called names – a form of victimisation that is often referred to as ‘relational bullying’.

The researchers also looked at whether children with a longstanding limiting illness or chronic condition, such as type 1 diabetes, vision problems or mental health issues, were more likely to be bullied.

Eleven per cent of seven-year-olds and 6 per cent of 15-year-olds had a chronic illness or impairment that limited their day-to-day activity.

The researchers said: “We know that being bullied contributes to social inequalities later in life – people who were victims in childhood often grow up to have low self-esteem, anxiety and depression, and perform less well in the labour market than their peers. These findings suggest that bullying reinforces the inequalities experienced by disabled people, putting them at a double disadvantage.”

Philippa Stobbs of the Council for Disabled Children noted: “We know that bullying remains the single biggest concern raised by children with special educational needs and disabilities. The fact that this continues to be so is unacceptable. This is the first time we’re able to demonstrate with absolute certainty just how pervasive this problem is for disabled children and young people across the country.”